International Academic Conference organised as part of the cycle IN THE WORLD OF SPECTACLES (planned for May 2020) | NEW DATE: 28th – 30th of November 2020.

Due to the current situation of the SARS-CoV-2 coronavirus global pandemic and the growing awareness of health concerns regarding international travel and group meetings that were planned to take place in not too distant future, we have been forced to postpone our conference “Circus: genealogies, imaginaries, translations”. We are sure everyone will understand the reasons behind this decision.

International Academic Conference
organised as part of the cycle:
‘IN THE WORLD OF SPECTACLES’

When: 28th – 30th of November 2020.
Where: Zbigniew Raszewski Theatre Institute 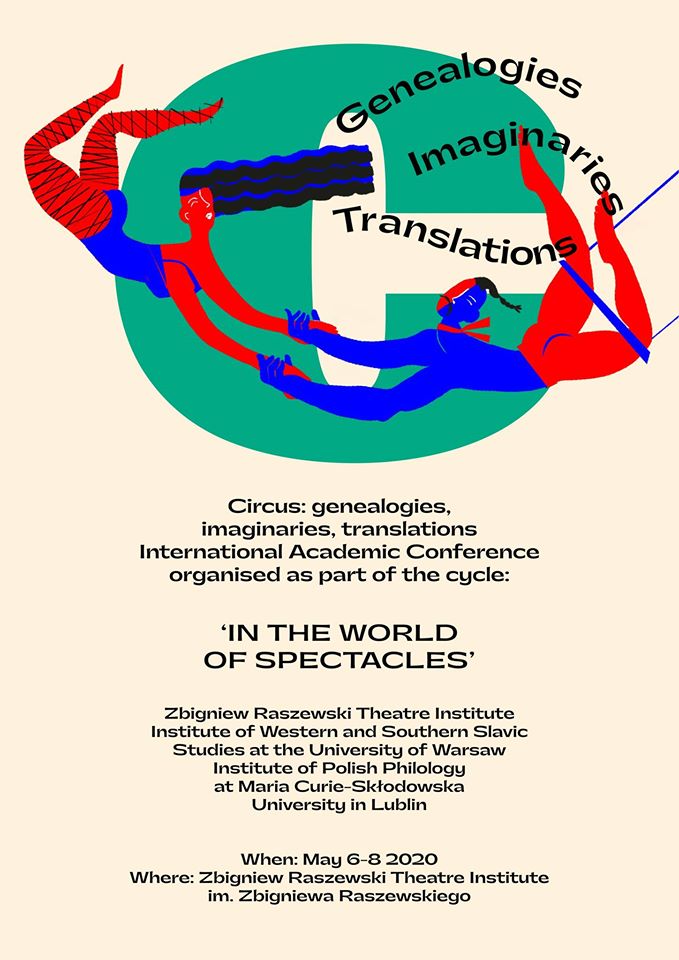 Academic research related to the circus is hardly a well-established discipline in Poland. Generally, scholarly undertakings focusing on the circus are supplementary to the studies of history of popular culture, anthropology of performance, performance studies, animal studies, urban studies or film studies. The circus has been almost entirely absent from the current, continually reproduced cultural hierarchies and distinctions. Meanwhile, the transformation of the loosely defined field of ‘the circus arts’, juggling and dell’arte into a distinct institution of the modern circus and an autonomous field of art was one of the turning points in the formation of modernitas within contemporary urban culture. Typically considered as the lowest in the hierarchy of arts or eliminated from it altogether, the circus also played the role of an inspiring repository of forms. It functioned on an ad hoc basis as a laboratory for technological innovations or an educational quasi-institution. The circus was also the precursor in propagating the standards of modern living: social mobility, physical training and aesthetics of corporality, the worship of celebrities and superheroes. It also played a significant role in the emergence of modern-day media and professional sport.

We propose a return to the ever-unresolved question of the position of circus within the Central European variety of modernity. On the one hand, circus was an institution of social life, subject to transformation and possessing its own, insufficiently described and documented and yet rich history associated with specific people and places. On the other hand, it was an imaginary that has grown with the passage of time: an archive of forms, images, cultural patterns, symbolic links and cultural practices. The circus has left its mark on all types of art and almost every kind of artistic production. Its civilizational and cultural position was based on dynamic, disturbing paradoxes: it was influential and marginal, and simultaneously aroused fascination and contempt. The circus was the realization of the civilizational dream of egalitarian art, and at the same time – as Starobiński writes in his essay ‘Portrait de l’artiste en saltimbanque’ [Portrait of the Artist as Saltimbanque] – provided modern thought with an image of a ‘hyperbolic leap beyond any reason.’ Today circademics – the officially non-existent and yet practiced by many – branch of academic studies can provoke and inspire. Its interests include, after all, a long list of currently discussed topics, a rich catalogue of the obsessions of contemporary times.

We hope that the conference will foster dialogue across and beyond the various academic fields and disciplines. Therefore, we invite theatre researchers, philosophers, historians, art historians, anthropologists, sociologists, literary scholars, and media scholars to attend.

Circus: archaic today and proto-modernist at the cusp of the modern era
Circus – a media archaeology perspective
The unwritten history of the circus in Central and Eastern Europe
The micro-histories, local stories, and personal tales of the circus
The institutionalization and social history of the circus
Philosophical considerations, the circus metaphor in the language of philosophers
The languages and forms of the circus (space, music, image)
Scientific and technological achievements in the circus, circus and the idea of progress
Theatricality of the circus – circus and theatre
Circus and the birth of film, contemporary dance, and cabaret
Circus and sport
Circus as an archive of motifs and quotes used in literature, theatre, visual arts, film, graphic novels, advertising, etc.
The religious roots of circus, circus and ritual
Political ideologies within the circus arena: the circus and the idea of the nation state, colonial conquests, fascism; circus during the communist period
Counterculture and the new circus, circus as a form of critical art
Circus audiences
The unapparent links between the circus and the carnival, the ludic aspects of circus
Circus as the imaginary of modernity and postmodernity: a repository of symbols that have fascinated the romantics and modernists (Starobiński), an impulse for the avant-garde (Peiper), a frenetic experience of the metropolis (Krakauer, Benjamin), one of the mythologies of modernity (Barthes)
Circus as a space of nostalgia, transgression, panopticon

An abstract of no more than 300 words and a short biography should be sent by 16 March 2020 to the following email addresses: gkondrasiuk@instytut-teatralny.pl and s.siedlecka@uw.edu.pl. Deadline for confirming participation in the conference: 23 March. Conference fee: PLN200/ EUR47  (academics), PLN100/ EUR24   (PhD students). Conference languages: Polish, English. Selected articles will be published in ranked academic journals.